The activities of the Standing Committee

State Secretary of the Union State of Russia and Belarus Grigory Rapota said he believes that there is an opportunity to resume Russia-EU economic cooperation. 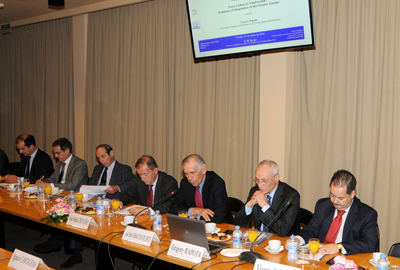 Relations between Russia and the West became worse due to the situation in Ukraine. At the end of July 2014, the EU and the US replaced selective sanctions against individuals and companies with measures against entire economic sectors.

In turn, Russia restricted imports of food products from the countries that had imposed sanctions against it. In June 2015, in response to the renewal of sanctions, Russia extended the food ban for a year, until August 5, 2016.

During a Madrid-based conference, From Lisbon to Vladivostok – the Problems of Integration in Greater Europe, Mr Rapota stressed the importance of European integration and added that the sanctions hampered building a common dialogue on further cooperation with the EU.

“The situation was made worse due to the sanctions. But I believe that it is possible to resume economic cooperation with both individual EU countries and the organization in general,” he said.

Ambassador Extraordinary and Plenipotentiary of Russia to Spain Yury Korchagin along with representatives of state, business and expert communities from Spain, Portugal, France, Hungary, Serbia, Estonia and Uzbekistan also attended the conference, From Lisbon to Vladivostok – the Problems of Integration in Greater Europe, which took place in the format of a working breakfast.